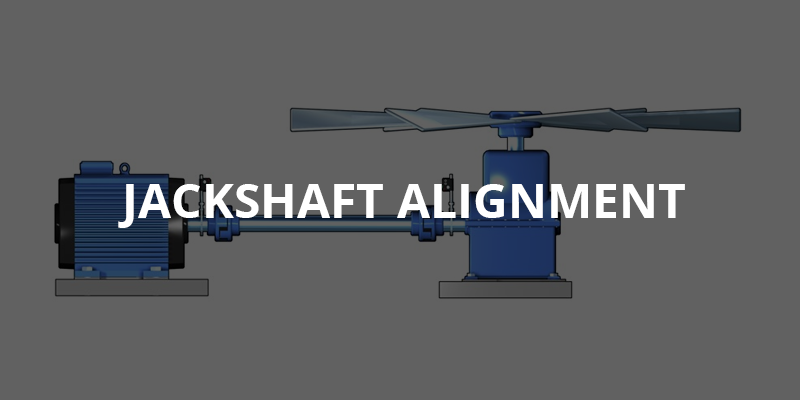 Traditionally, maintenance departments do not sing their own praises. Maybe that should change? In many companies the maintenance departments are still considered to be a necessary expense instead of a profit center. This perception is starting to change as improved maintenance procedures demonstrate cost savings that go directly to the company’s bottom line by reducing the energy costs and improving reliability, so really this is a great way to reduce your carbon footprint as a business.

One example is Lake Erie Steel, a large steel mill in Nanticoke Ontario, who recently purchased an EASY LASER, dual beam, shaft alignment tool. This laser alignment tool gives them the ability to align the 14 foot long Jack Shafts on their water cooling towers. Spanning the 14 feet coupling to coupling is not a problem for the Easy Laser that is capable of shaft alignment over a distance of sixty feet. In the past a contractor had done this work using a single beam shaft alignment system that could not span the required distance of fifteen feet from the motor to gearbox. The procedure for this type of shaft alignment system had been to measure alignment at each coupling on either end of the Jack Shaft and then use both sets of alignment results to calculate the necessary correction in order to align the machine units.

Both jack shaft couplings are measured when the laser cannot span the required distance.

With the Easy Laser, Lake Erie’s Industrial Mechanic Cliff Dosser, and his crew of apprentices and Co-op Students, who work in the Hot Strip Mill Pump Zone, were now able to start the alignment of a jack shaft by mounting one laser/detector on the motor shaft and the other on the gearbox shaft there-by doing true shaft to shaft alignment that was not possible previously.

hen by simply using the laser beams which were centered in the closed target at the 9 o’clock position the shaft was then rotated to the 3 o’clock position. This is a very quick and easy procedure that is used when doing rough alignment for jack shafts. It determines immediately if the machine is out of alignment and the proper movements for correction. In this case, it showed that the alignment was grossly out so corrective action began. 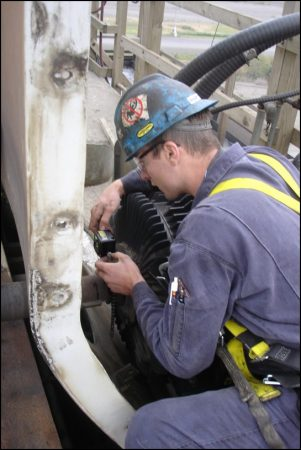 Now with the laser target doors open, measurements were recorded in as little as forty degrees of shaft rotation. The display showed real time readings in both the horizontal and vertical planes for the moveable machine. The moveable machine is usually the motor however, it is possible to change the configuration of the machine in the laser display if the driven (Gearbox) unit is to be moved or even a combination of different machine feet. The trick is in choosing the correction that requires the least amount of movement. Now all that was needed was to re-position the machine but the real skill was in controlling the movement. At a distance of fifteen feet you don’t bump anything; it’s a gradual move which is best done with jacking bolts. The work was completed and unit was put back in service. Cliff took an initial amperage reading on the unit before the re-alignment and it was found to be 174 amps. After the work was completed another reading was taken showing 155 amps. That’s a whopping 19 amp drop!

Although Lake Erie Steel is running almost 24/7 it was estimated that the cooling tower ran half the year as it is not required in the winter months. That equates to 4,380 running hours so a 19 amp drop works out to a little over 10 in energy which would be 78,735 Kilowatt hours saved. Using the average of 0.07 cents per KW, a savings of $5,511.44 per year is realized. WOW!

I think Cliff and his crew should be quite pleased with themselves as they look at their success in yet another way. They have not only reduced the plant’s overall carbon footprint by reducing energy that relates to 54 metric tons of CO2, or the equivalent of 8.2 cars off the road, but they have also done an excellent job of re-aligning the motor and gearbox which means that, barring unforeseen circumstances, the plant will get the optimum life out of the cooling tower drive. I’d say that was a good day’s work, wouldn’t you? All they have left to do is make sure they are partnered with a brilliant company that specialise in cooling tower water treatment which will ensure they are being as environmentally friendly as possible. More information about this can be found at https://www.veoliawatertech.com/en/expertise/applications/cooling-tower-water-treatment. 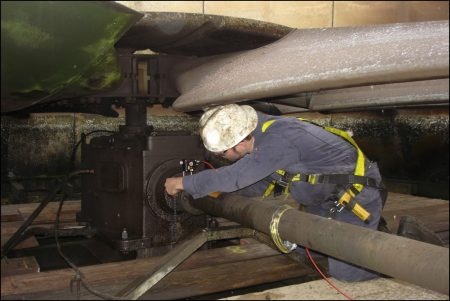 One laser detector is mounted on the motor shaft which is outside the cooling tower wall.

There is not much room under the large fan blades for the apprentice but the other laser detector is mounted on the Gearbox shaft.

The laser beam from the motor shaft passes through the opening in the cooling tower wall.

The beam hits the detector that is mounted on the gearbox for shaft to shaft alignment.