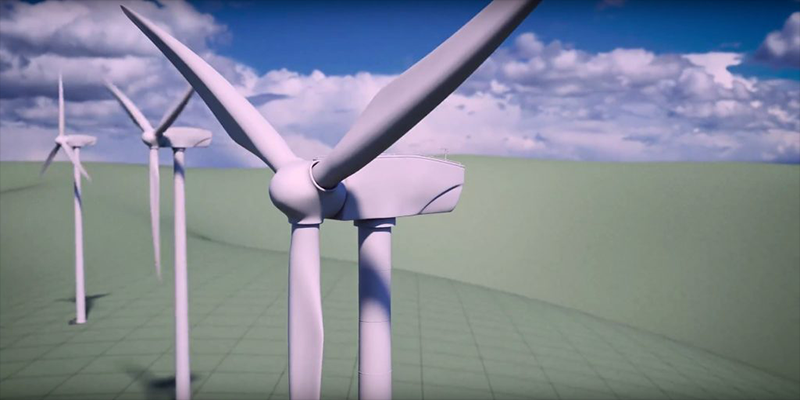 You cannot say it’s a new industry because its been around for quite some time however, you can call it a growth industry because yes, it’s still growing. In fact, I can see it getting bigger. My reason for this is that I can see some remote communities taking advantage of this technology, technology that is improving with better power storage and other modern machinery. I can also see some large manufacturing plants generating their own power to save on the costs because as we know, power is expensive to buy. I cannot say that we are there yet but as costs come down it looks like a viable alternative to what we do now in many cases.

Seeing wind turbines is common place these days and they are a large part of energy production. A wind turbine harnesses wind power to generate electricity. The most common is a horizontal axis wind turbine application which have three main components. A rotor, which the blades are attached to. A gearbox which increases the RPM of the rotor. And a generator, that is rotated and produces electricity, power. 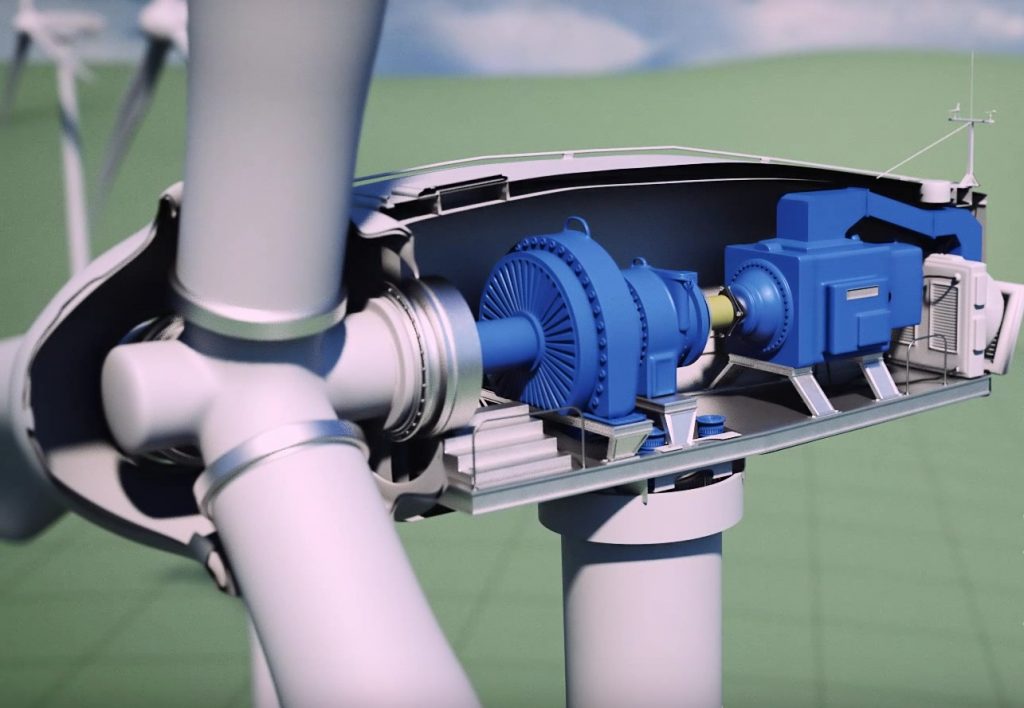 (Inside the nacelle. From left to right: rotor, gearbox and generator.)

The rotor, which is relatively low speed (low RPM), converts the kinetic energy of the wind to rotate the shaft. Based on the length and width of the blade, this is a very powerful force. To generate enough power, we need it to be faster, hence the gearbox. The gearbox is a speed increaser having a ratio of 92 to 1. This powerful and now high-speed rotational torque is passed through a coupling which turns the generator to make the electrical power. Easy right?

All of this plus a hydraulic system that allows the blade to tilt/pitch into the wind – much the same as a ships propeller can – and its all in a container called a Nacelle. This nacelle sits on top of a tower which can be several hundred feet in the air. The whole nacelle is geared so it can rotate or “yaw” into the wind as it’s called. As you can imagine, it can get battered by the elements like heat, cold, wet, etc. 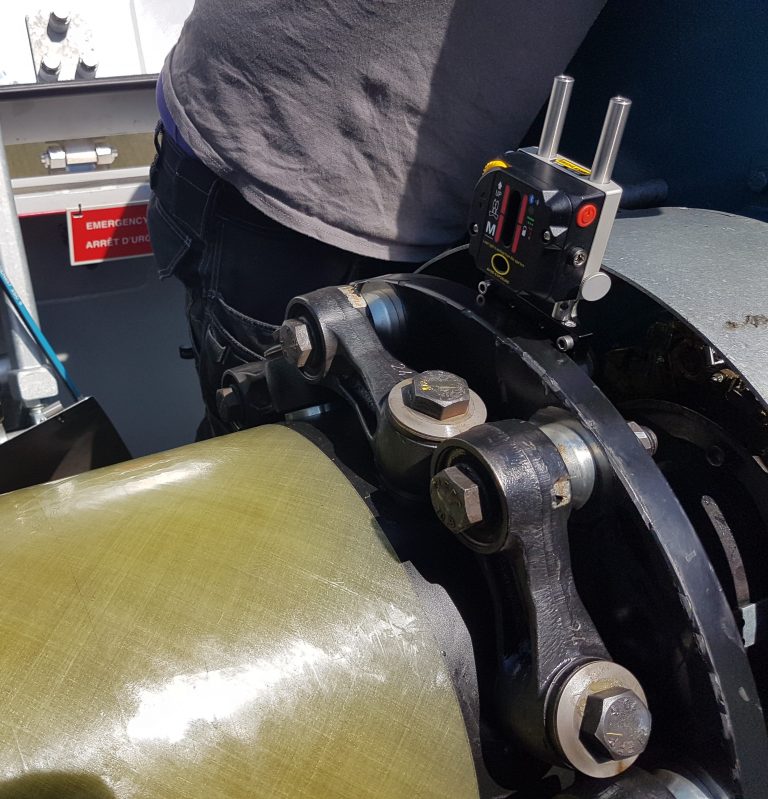 It’s a sophisticated asset that can pay for itself (we should all have one!). However, it requires high-quality maintenance and this is critical to its life expectancy. Consider the cost of replacing one of these components that I listed out. Its not just man power that’s needed; for some items, cranes need to be on site. So, think about what you don’t want in the nacelle. One thing would be vibration. We all know that excessive vibration destroys machines, so making a reduction or elimination of vibration is very important. One of, if not, the most common cause of vibration is shaft misalignment. Therefore, it should be a priority that the gearbox to generator shaft is aligned correctly.

Some time ago I did some alignment work on a ship. The gentleman that I was working with described the ship as a floating upside-down bell. He pointed out that the vessel would ring (vibrate) when excited by the right natural vibration frequency. The vibration would travel through the steel structure of the ship. Transient vibrations do pass from one machine to another and it’s the same in a nacelle, like a ship, its one big steel frame. The reason is that there is no mass to absorb the vibration (no ground), at least not close by. We all know that mass dampens vibration. If you have a machine mounted on a platform or mezzanine it will most likely vibrate more than the same machine mounted on a concrete base. 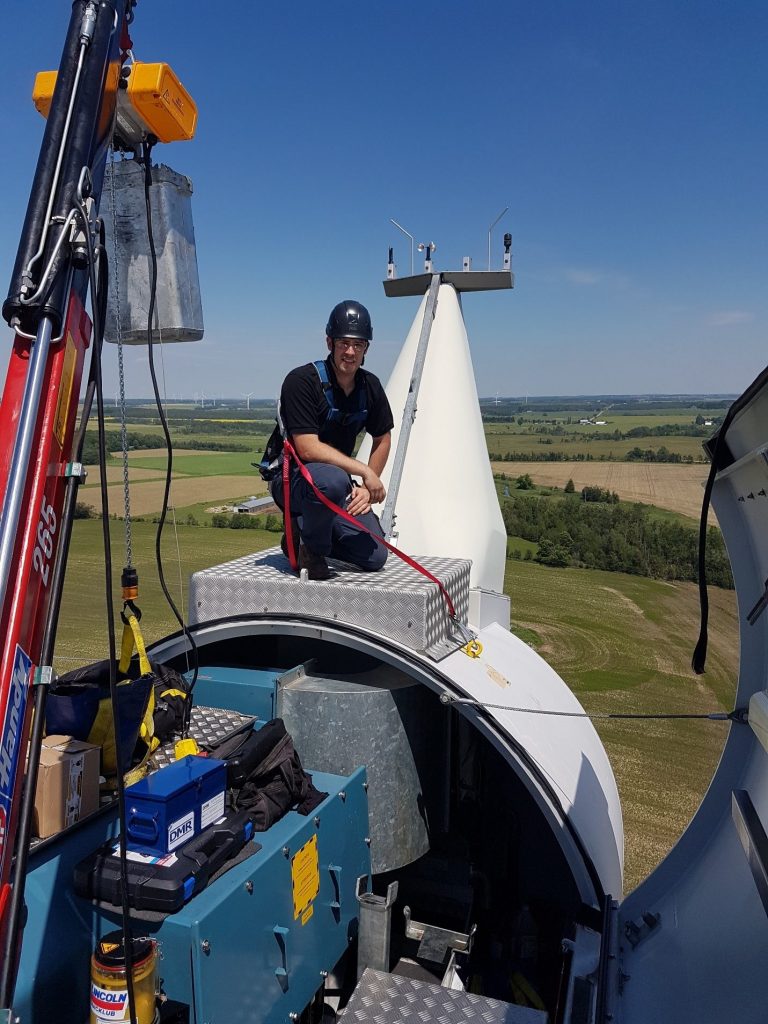 The alignment procedure is quite simple. You normally use the gearbox as the stationary machine and align the generator to it. You use shims to adjust the misalignment in the vertical plane and jacking bolts for the misalignment in the horizontal plane. The OEM will normally give a tolerance as well as any offsets that may be required. For instance, on some models the sheer torque of the rotor when in service (online) will offset the gearbox. Because of this, a target value is set in the alignment laser system to compensate for the offset when aligning while offline.

Tolerances are based on RPM and this drive system would be variable speed, so you use the highest speed. A normal rotor input is 20 RPM which will give the gearbox an output of 1840 RPM. However, regardless of what the tolerance is we recommend that you minimize it to the best that you can get because in this case, less is more. Less vibration equals more exerted life of seals, bearings, gears, etc.

You still have all the other concerns to address such as base flatness, soft foot issues, etc. However, proper wind turbine alignment can minimize wasted energy, increase component life of the machines, and help reduce the possibility of catastrophic failure. With a customized Easy-Laser shaft alignment system using special brackets, the gearbox and generator can be aligned even if the coupling is removed and the brake is locked. This way the maintenance technicians can make alignments even in bad weather conditions when the wind is stronger, but keep safe. Speaking of keeping safe, we had one of our own do some on-the-job training for a customer in Southern, Ontario recently, see photo below.

All of this should give us food for thought. Is the lack of mass making these machines more sensitive to vibration a positive thing or a negative thing? I say it a positive thing because if you are aware of it you will do something about it. On land/ground-based machines the damaging forces are there but we do not see them as much because mass dampens the vibration. So often it is ignored which leads to machine failure in many cases. But that’s what I think, what do you think?