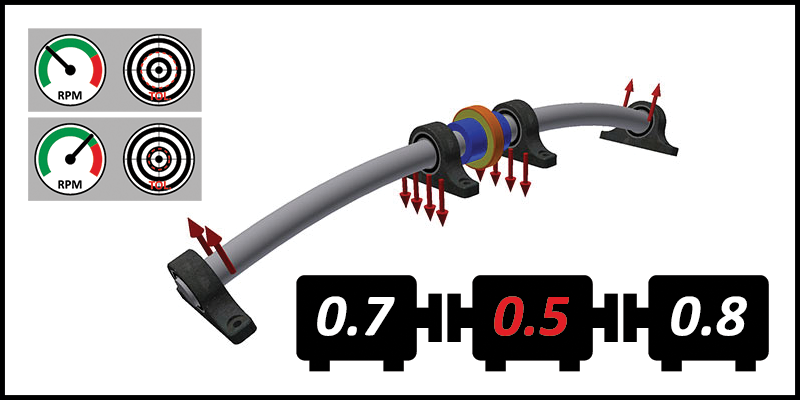 In order for machines to perform as intended, they need to have the correct conditions. But do you use the available guidelines when you are performing shaft alignment?

The following was written by our partner Easy-Laser® AB and can also be viewed on their Blog here. Enjoy!

The word “tolerance” denotes an interval within which something is accepted. We people all have different limitations as regards how much exertion we can tolerate before our bodies let us know, get tired and finally break down. The bodies of elite athletes are adapted to the task they are undertaking. One thing that unites all elite level athletes, regardless of their physical make-up, is all the time they devote to creating the optimum conditions for their task. The amount of time they are expected to perform varies but is negligible in relation to the time they spend on optimizing their function.

The make-up of machines also varies and is adapted to the task that is to be carried out. The time they are expected to perform varies, but in many cases amounts to many tens of thousands of operating hours. The tolerance interval for a specific machine set-up denotes the physical conditions that need to be satisfied in order for the machines to perform for the expected length of time, and to generate/produce what is expected of them in a cost-effective manner. Energy and maintenance costs jointly make up around 75% of the life cycle cost of a machine. The purchase price only represents 10%!

WHAT DOES MISALIGNMENT COST?

A study produced by Pumping Systems Matter & Hydraulic Institute finds that the purchase price of a correctly dimensioned machine corresponds to approximately 10% of the total life-cycle cost. The energy cost corresponds to 40% and maintenance costs to 35 %.  Other costs amount to 15 %. Similar studies arrive at approximately the same figures. Energy and maintenance costs jointly make up around 75 %  of the life cycle cost, and it is here that a correct or incorrect machine set-up can have a significant impact on how much you have left in your wallet at the end of the machine’s anticipated service life.

The energy cost naturally varies from machine to machine, but documented studies show that correct shaft alignment makes it possible to achieve savings of between 2-17 %. The life-cycle cost for machines is based on a calculated maintenance requirement, which does not take into account the fact that almost 50 %  of machine breakdowns in rotary machines are caused by misalignment. The overall acceptance interval must give consideration to all vital machine components.

WHAT GOVERNS THE ACCURACY WITH WHICH AXIALLY COUPLED MACHINES HAVE TO BE ALIGNED? 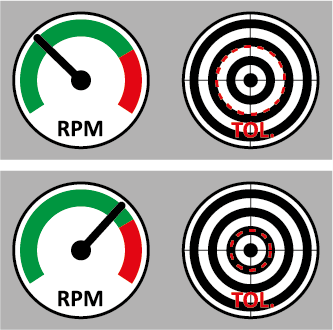 It is not possible to generalize tolerances for pumps, gearboxes or any other machine, in fact. They are used in many different ways, each adapted for its specific task, as we touched on in the introduction. Each vital component has its own tolerance, and the overall acceptance level has to give consideration to all vital machine components, their relationship with each other and the operating conditions. Only then can we gain an understanding of the actual tolerance interval.

It is the friction in a bearing that determines how much heat it generates, which in turn limits the operating speed. The friction is dependent on several factors: load, bearing type, lubrication, etc. Changes in bearing play and/or misalignment of bearings usually leads to increased friction. A higher rotation speed places higher demands on alignment accuracy in order to counter friction.

WHAT IS THE SITUATION IN DIFFERENT TYPES OF COUPLINGS? 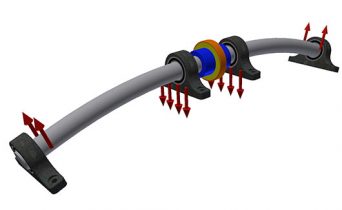 Couplings become worn and there are several factors that play a role. Couplings including rubber elements are affected by the surrounding environment, and a crowned teeth coupling is dependent on the correct lubricant in the correct amount in relation to its surrounding environment. The wear on couplings increases in the event of alignment faults. Depending on its design, one coupling type can have a greater preventive effect than another when it comes to reducing its own impact from alignment faults. Flexible couplings are often used to transfer torque between machines. Couplings must then be dimensioned to reduce the harmful forces that often arise when a machine changes from stationary to operating mode, as well as to be able to handle process movements. However, in order for the machines to be able to perform for the anticipated length of time, acceptance intervals in operating mode must be satisfied for all critical components. The coupling manufacturer can often specify the maximum permitted limit for the coupling in question, but if this is adhered to, it can cause excessively high forces in the machines’ bearings.

It can generally be said that if the machines’ tolerance intervals are satisfied, the coupling’s tolerance is also satisfied. When changing coupling type, you are recommended to consult not only the supplier of the coupling, but also the machine supplier. This is because it is primarily the machine design that determines the accuracy with which the machines must be aligned. In the event of a warranty claim resulting from a machine breakdown, the manufacturer of the machine will in all likelihood not approve the involvement of a third party.

ARE THE MACHINES OPERATING CONDITION IMPROVED AS A RESULT OF A SMALL ALIGNMENT FAULT?

In short, no. But at the same time, theoretically, yes. When in operation, the machines operating condition may be improved by not being perfectly aligned. Imagine that the shafts in the coupled machine components, when in operation, are aligned without any offset faults and without any angular faults. The bearing play could then have a negative effect, as the rotation of the shaft at a particular rotation speed could cause it to float, thereby causing self-oscillation of the shaft which, in turn, would in all likelihood result in vibrations.

In ships and when installing propeller shafts, this is taken into consideration. Here there is no rigid concrete foundation to absorb vibrations/movements. The bearing housings are installed in the hull, which means that vibrations/movements from the bearing housings will, in all likelihood, cause oscillations in the hull. This type of installation differs greatly from the installation of pumps/motors, for example. In both cases, much time is devoted to calculations and tests by manufacturers, which subsequently form the basis for installation. However, regardless of whether we are aligning a propeller shaft or a pump/motor, it is the design of the machine elements that provides the conditions we need to satisfy to achieve performance for the expected time.

Generally speaking, it is unlikely that machines can be aligned so precisely that, when in operation and with the forces to which they are subjected, they will not have at least some offset or angular fault. However, there are cases when it is suspected that this has occurred, so it is good to be aware of.

When you purchase a laser shaft alignment tool, this may include tolerance tables. In this case, the tables give consideration to the most commonly occurring machine types, their speed and, in certain cases, their coupling type. At ANSI (American National Standards Institute) in the USA, work has been conducted for some time aimed at standardizing shaft alignment tolerances for axially coupled machines. This is a wide-ranging process, not only focusing on the direction in which the shafts are pointing, but also stipulating demands in relation to factors throughout the entire machine set-up, all of which impact on the machines’ positioning. Many large machine manufacturers are included in this group, and it is very likely that the work that is now being conducted will form the basis for shaft alignment tolerances not only in North America, but also in the rest of the world. Because you need shaft alignment tolerances to provide guidance when setting up a machine! Everything else is purely a guessing game. And usually an extremely costly one.