BENCHMARK PDM > MAAD Blog > Articles & Case Studies > What’s wrong with this image? It’s more than just having too many shims or being bolt bound 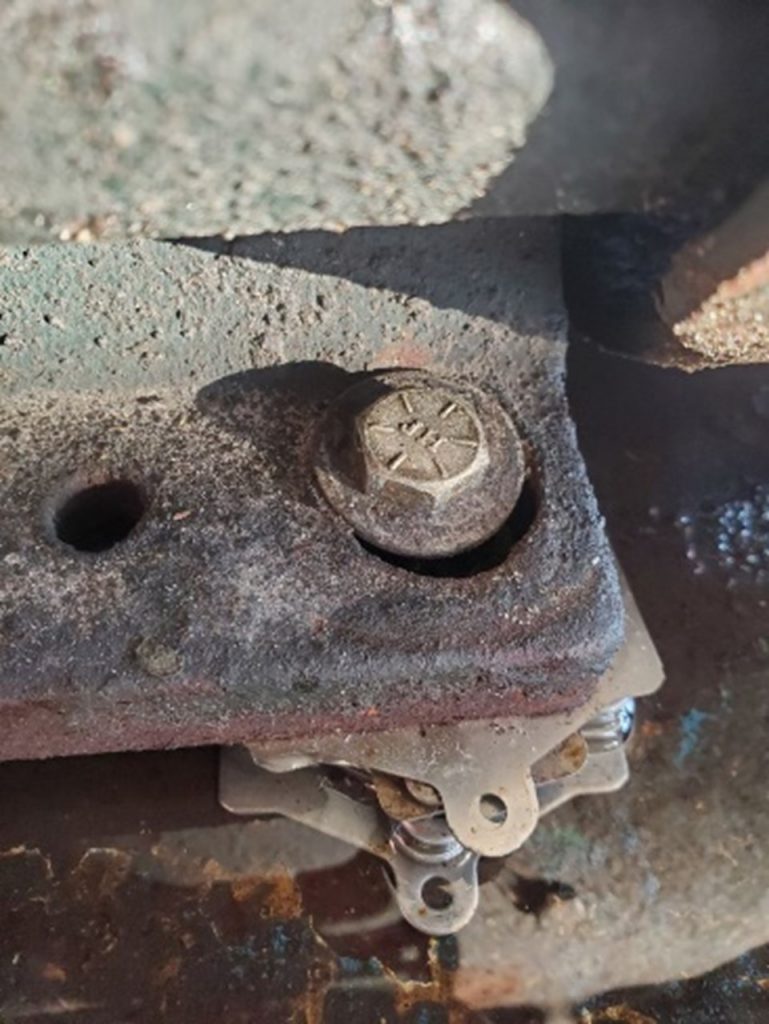 What’s wrong with this image? It’s more than just having too many shims or being bolt bound

I saw this picture that was part of a post by Robert Lofthouse of Tremor Vibration Services on Linked In. I commented that “this is a classic and it will be bolt bound as well, it’s called reality maintenance”.

Dan Audet, a millwright from the Kapuskasing area in Ontario, messaged me to ask why I said this because in his experience, its not reality. It was a genuine question but it showed me that we all see things differently, we have different perspectives based on our experiences.

Let me give my perspective as to what I see in this picture, bearing in mind that it’s only guesswork. Then maybe you can give me yours?

If I start with what type of machine I think it is, I would say it’s a motor because it looks like a low-cost motor foot. In essence, it looks like a piece of angle iron down the side of the motor. You can see that the foot area is not too thick which means it will be flexible.

If I look at the bolt head, if it’s a nut and bolt, it looks like the wrong size which means it may have been put there on purpose so that they get more movement in the horizontal plane. Normally if this is done, you use a higher-grade nut and bolt so that you can still use the correct amount of torque when tightening it down. This may be so because it looks like a grade eight (8) bolt which is a good quality bolt and looks out of place in this picture.

If it’s a bolt going into a threaded hole, then you can see that the foot is hard up against the top part of the bolt shank or should I say it looks to be.

But the big issue is that it’s missing a plate under the bolthead to cover the bolt hole. Without the plate, it looks like the washer they have is being pulled into the hole. For me, I would rather open a bolt hole than machine down a bolt. However, if this is done, I think you should make a plate washer out of flat bar to make sure you cover the complete hole. In this way I do not think you change the integrity of the foot mount but by machining a bolt shank down, you change the integrity of the bolt.

If I look at the shims (and I’m guessing they are A size which are 2” x 2”), there is a lot of them. And I know it’s only a guess, but it looks like half an inch worth. The ANSI standard is a max of five (5) shims.

The issue with this is that it can cause a resonance in the machine and vibrate. This amount of shim can cause softfoot because the pack is spongy, it will create distortion in the base and vibrate. And as we all know vibration is a machine killer.

But the real issue is why so much shim is needed? If it is a motor, what is it driving and why is it so low? Can you imagine if all this shim is only under one end of the motor? That is a lot of angle. So hopefully it is equal amounts. And a large portion should be plate not multiple shims. However, we need to see a lot more of the machine before making any concrete suggestions.

The reason why I call it reality maintenance is because over my years I have seen a lot of this kind of work. There are many reasons why it happens. One is the quick fix and because there is not the correct motor available, another is used. It goes in fast and because it is running OK its never re-done correctly.

It can also be that the individual that did the work does not have the knowledge to know that this is incorrect. Or how maybe he is fed up telling the management that the base needs re-work and never gets an answer? There can be many reasons why this is done. And that is the point, it is done and that why I call it reality maintenance. I will admit that when I was on the tools, not every installation I did was the best for a myriad of reasons. Because of this, I will never point the finger at anyone.

The fact that Dan doesn’t see these types of issues in his experience is good thing, it means in his experience, it looks like he is doing it right. Maybe its not as commonplace anymore, which is also a good thing. We have certainly come a long way since I started when it comes to precision maintenance in the industries I’ve worked in.

Anyways, that’s the way I see it. What about you?